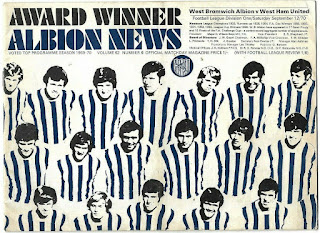 Hello!
This post of 'After You've Gone' is a tie-in with KICKSTARTER for a book that I've been working on with graphic designer Matt Caldwell:

The book breaks new ground as it digs deep into the rich history of an astonishing era of football programme design, uncovering the stories of their remarkable creators. It features stunning cover designs from more than 40 British Football League clubs - a visual treat transporting us back to a time when a new generation of designers had burst on the scene fresh out of art school and off the football terraces...

1 Shilling has tracked down these long-forgotten paradigm shifters, so for the first time we hear their story, both in their own words and through interviews with their families and colleagues. It’s a tale of passionate football fans designing for fellow supporters - but unlike the fashion or music industries - the names behind the artworks for the trusty, pocket-money priced, football programme were often uncredited or ignored. Until now. 1 Shilling champions these unheralded artists, finally cementing their deserved place in design history.

Spread across 200 pages, 20,000 words, 100 images and 11 chapters, 1 Shilling takes you on a nostalgic journey into the archives of football programme design. At its heart, the book is a deep exploration of the work of master creator John Elvin, a designer who broke all the rules. Ignoring the conventions of the day, he chopped up photos, massacred the formal code of lay-outs and blew-up typefaces beyond the imaginable.

We meet a geezer from West Bromwich called Graham who designed programmes for several First Division clubs (in the same season), while high as a kite on a combo of lighter fuel and magic markers. Then there’s John Elvin’s protégé, Bernard from Birmingham, a prolific powerhouse of dynamic design in the Midlands. And also Don, an art school teacher from Aberdeen who conjured-up fantastical images for a few shillings’ worth of beer money.

In a collection of essays, 1 Shilling explores the wider cultural, economic and political backstory of British football over a transformative two decades from the mid-1960s. The book gets to the core of the ritual which saw fans buying programmes that were read at the match, in the pub, at home - and often treasured for years and years.

Our objective  is that following printing and distribution, a significant donation will be made to the Huntington's Disease Association (HDA), a national charity supporting anyone who is affected by Huntington’s Disease. It was Huntington’s Disease that claimed the life of pioneer programme designer John Elvin at the age of just 53.

Huntington’s is not something you can catch: it is inherited. Every child conceived naturally to a parent who carries the Huntington’s gene has a 50% chance of inheriting it. You can live with the faulty gene for years without symptoms, but eventually it will impact on your life, manifesting as changes with movement, learning, thinking and emotions. Once symptoms begin, the disease will always progress: there is currently NO cure.

As an organisation boasting many committed football fans, the HDA were intrigued to hear about the 1Shilling project and the story John Elvin, especially when they learnt how Huntington’s Disease took the life of John at a young age.

The funding that we generate through this Kickstarter will be for the printing and distribution of the book. All profits will be donated to the Huntington's Disease Association.

We have already factored in a budget that will enable us to print 500 copies, although we’d love to raise enough to print a few more, so reducing the unit price for printing - and maximising the surplus which will all go to charity.

Remaining copies will be sold & distributed through online and physical retailers.

THANK YOU FOR YOUR SUPPORT!

A letter from Argentina to Laurence Harvey, 1957 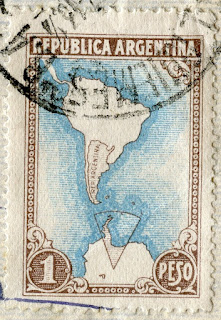 On Sunday afternoon, I dropped in to the Business Design Centre in Islington, N1 to have a look around the London International Stamp Exhibition 2022. I took some time to view the various philatelic exhibitions on display, and had a rummage through the hundreds of thousands of postage covers that were sold in the dealer's areas. I was hoping to find some interesting items relating to my ongoing exploration into public telephone boxes - or perhaps any ancient fragments of ephemera connected to advertising gramophone companies and recordings.
By sheer chance, I spotted an envelope addressed to the actor Laurence Harvey, perhaps best known for his performance as the aspirational womaniser Joe Lampton in the 1959 film adaptation of John Braine's 'Room at the Top', or the hypnotised Communist spy in John Frankenheimer's 'The Manchurian Candidate'. Sadly the letter itself was not enclosed, but they rarely are in these kinds of philatelic artefacts. But I couldn't resist buying the cover, especially as the asking price was a mere £2.
The letter had originally been sent from Argentina on the 28th May 1957 at a cost of 3 pesos, and on the reverse there is a another post mark. A cancellation dated 10th July 1957 showing that the letter had taken over two months to reach the corrected address for Laurence Harvey - c/o Romulus Films in Soho Sq, W1 - the company founded by the Eton-educated brothers John and James Woolf.
The year 1957 was certainly a busy one for Harvey. He had two starring roles in British films - in the comedy drama 'The Truth About Women', and  'After The Ball' the biography of Music Hall performer Vesta Tilley.
We can never know what exactly were the written contents of the letter to Laurence Harvey sent from Argentina in 1957. However the name and address of the sender is on the back of the envelope: R. Mendez, Moreno 215, Quilmes, Buenos Aires. More than likely this is a fan letter to Harvey, written from a country that was in the midst of a series of coups in the fifties, and perhaps one of many dozens a week that he would have received at this time. Somehow the envelope found its way onto the philatelic market, sitting in collections for decades, and then boxed up to be taken to various stamp fairs until ending up in the hands of another buyer - this time me...
Little did Laurence Harvey know in 1957 that his career would soon take a major upturn after the huge public and critical success of 'Room at the Top', just two years after this letter was sent from Argentina.
Harvey continued to star in films and television up to his death from cancer in London, at the age of 45 in 1973.
Posted by Alan Dein at 14:47 No comments:

After a short hiatus, here's another set of old postcards that include a vintage telephone box within the views of British street scenes.
There are some lovely ones in this collection, and you may feel the urge to check Google Maps to spot which of the phone boxes are still in situ after half a century or more since they were photographed for a trusty and traditional picture postcard... 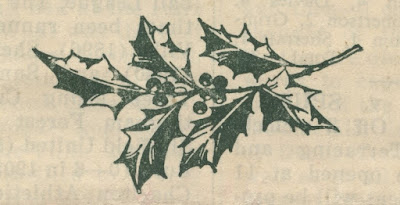 Welcome to my final post of 'After You've Gone' in 2021. As in the past several years, for this Seasonal theme, here is another match day programme from a Christmas Day football match. This time it's an old First Division encounter between Arsenal and Derby County which was played at Highbury on 25th December 1948.
As was the tradition in those days, the opposing teams would play the home and away fixtures on Xmas Day and then usually on Boxing Day or the day after. In this case, the first match took place in London on the 25th - and then at Derby's Baseball Ground two days later on 27th December.
Arsenal Football Club treated the fans to a special festive programme printed in red and green, accompanied by an illustration of holly leaves and berries on the cover. The game itself must have been a wonderful slice of Christmas entertainment, as 43,000 fans witnessed a 3-3 draw. For the record, Derby won their home match 2-1 with 33,378 in attendance.
Much of this slim eight page programme was dedicated to nostalgic stories with a Christmas theme, though there was clearly much excitement in the air with the prospect of an upcoming FA Cup 3rd Round home tie versus North London rivals Tottenham Hotspur, who were then playing in the old Second Division. It was a game that the Gunners would win 3-0, but coincidentally they met up with Derby again in the 4th Round draw, who would go on to win the match 1-0 at the Baseball Ground.
Besides this unique Christmas edition, Arsenal's 1948/49 season programmes were identical in format to the issues of the previous season. These clearly reflected the post-war austerity measures. However, in 1949/50, the Arsenal programme underwent a transformation as both page count and page size increased - as the availability of paper must have increased dramatically after years of rationing. On the pitch, the club failed to hold on to the First Division trophy they'd won in 1947/48, ending the season in 5th place. Derby finished up 3rd in the table. 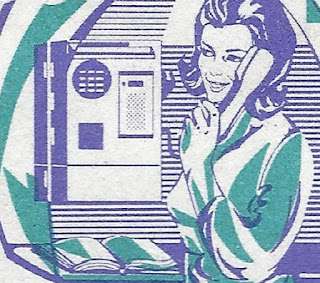 In July 1988, the Yugoslavian Post Office printed a 23 x 26 mm stamp depicting a payphone with a woman on a call. It was part of a wider set illustrated by D. Cudov that was issued over a two year period marking the work of the postal services. Other denominations in the series showed mailboxes, computers, envelopes, post women and even carrier pigeons.
The payphone stamp has a range of variants, from a colour change to overprints that reflected the ongoing revaluations of the Dinar due to a chronic inflation in the 1990s, and the independence of nations within former Yugoslavia. 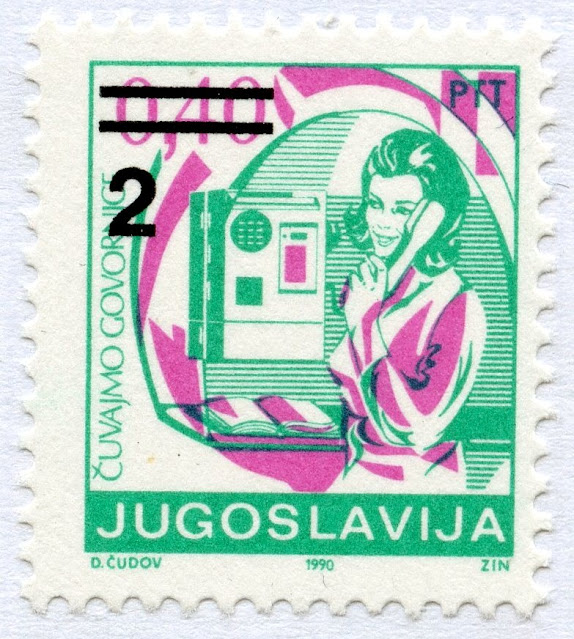 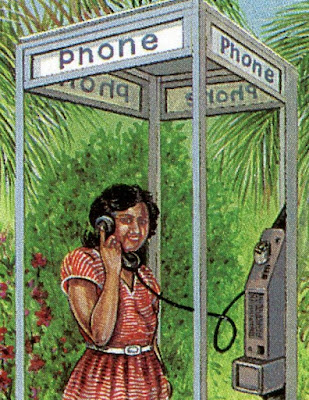 In May 1986, Seychelles in the Western Indian Ocean, issued a four stamp set depicting 'Inter-Island Communications' as part of their commemoration of the AMERIPEX '86 stamp show. Dubbed ''the World's Fair of Stamps", this was the largest philatelic show to be held in America's history with some 150,000 people attending, and over 50 participating countries.

The event took place at the O'Hare Expo Center in Chicago, Illinois between May 22 to June 2, 1986. Dozens of countries across the globe - from the likes of Bhutan, Jamaica, Poland, and Tanzania - issued sets of stamps marking their participation in Ameripex '86.

The Seychelles 2 Rupee stamp shows a young woman on a call in a 'public telephone kiosk'. 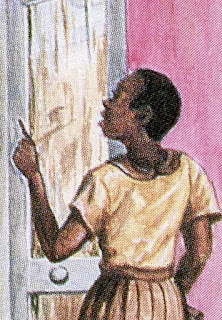 On the 24th October 1988, International Direct Dialling (IDD) was introduced in Ghana, West Africa. Two years later, the Ghana Postal Service issued a four stamp set dedicated to its telephone service. Two of these depicted Ghanaians using a public telephone.
The lower denomination issue shows a man inserting a telephone card into a pay phone. For the 200 Cedi stamp, three women are congregating around two public telephone boxes.
I've not been able to identify the illustrator of these stamps, so any further information will be much appreciated.