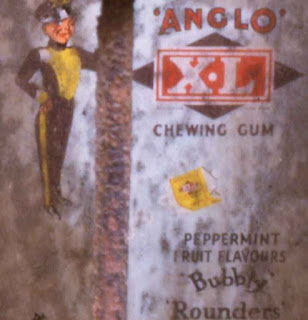 Another of my photographs taken over 25 years ago. A derelict newsagent's shop in Spitalfields, London E1. Adverts covered in grime affixed to what I recall were barred basement windows.

Back in March 2015, I posted the Basutoland Footballer, a product of Anglo's long run of trade cards that often accompanied their gum. Anglo-American, founded in 1929, was a subsidiary of the famed confectionery giant Mackintosh's of Halifax, Yorkshire. 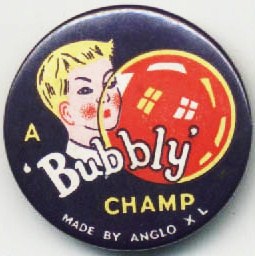 Player's introduced their DIGGER brand in 1917. Dubbed after a term for an Australian soldier - though "digger" had actually derived from the name given to prospectors of the 19th century gold rush era. The tobacco itself was grown in Africa, India or Canada, and smokers could buy it in a multitude of formats including: flake, mixture, shag, and pigtail. 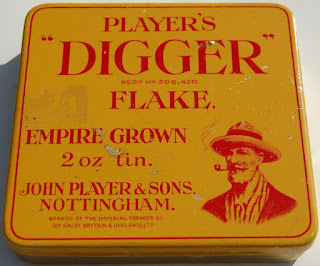 These glass-backed adverts would almost certainly have been destroyed when the time eventually came to refurbish the property..
Posted by Alan Dein at 15:56