For the 'PRESENT'...and the future 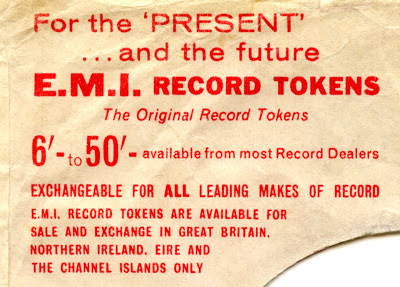 A few years ago, a good friend of mine gave me a fabulous birthday present. It was very thoughtful, highly imaginative and rather historic - yet it was an absolutely useless gift! Thirty shillings worth of EMI Record Tokens, and still stuck to an original gift card showing the 'Top of the Pops' studio in colour. Amazing how this piece of ephemera survived at all. These Tokens were designed to be exchanged for records - and not treasured as what would have been a rather expensive keepsake back in 1968. Perhaps the original owner used the small (10 cms x 13 cms) folded card as a book mark, and then just forgot about it?

It's impossible to discover why this particular EMI Record Token Card has survived. But, I'm very glad it has. This item is a little window into the past, which offers plenty of tempting details to dwell on...

The EMI Record Tokens were purchased in December 1968, at Tudor Radio, which was an electrical supplies shop in Worcester Park, South West London. The buyer would have been able to choose from several designs for the greetings card - which actually set you back an additional 4d (converted into Two New Pence by Decimalisation in February 1971).

Forty five years ago, the owner of thirty-bob's worth of Record Tokens would not actually have been able to buy a full-priced LP record. A stereo classical album on the Decca label was 43s 6d in 1968, and a pop disc on the Parlophone label was a little lower at 37s 5d. In fact, the Number One LP at Xmas '68 was 'The Beatles' or more commonly known as 'The White Album'. It retailed at a massive 73 shillings! Of course you could have been tempted by the far cheaper budget labels like 'Music for Pleasure', which back then cost 13s 11d.

In fact the owner could have bought an album for almost the exact sum! I've tracked down a triple LP package which was issued by the budget 'Marble Arch' records with its snappy title: 'Two Hours in the Wonderful World of Piano Concertos and Rhapsodies'. It was on offer at the price of 29s 11d - just one single old penny under 30 shillings! But, according to the 'Instructions' on the back of the Record Token card, the Penny could not be refunded in cash.

I suspect that these days the recommended retail price of music, compared to two or four decades ago, has never been cheaper on the pocket. Thirty shillings, according to various online historic inflation calculators - is equivalent to just over £22 today. That's the price of not just one, but two, pop albums today.

With the EMI Record Tokens in my hand, I play the daydream game, imagining that I've been transported back to my local record shop. It's Xmas 1968. What records would I buy with my 30 shillings (and the few extra quid in old pound notes that I've snuck in my pocket to top it up)?

Oh, as for June 2013. The site of 'Tudor Radio', where the Record Token Card that was originally purchased back in 1968, and which has taken me on this musical-ride through space and time, is now, wait for it...a KFC fast food outlet.

Suppose you can get several buckets worth of chicken and chips for today's equivalent of 30 shillings...

Email ThisBlogThis!Share to TwitterShare to FacebookShare to Pinterest
Labels: 73 shillings, EMI Record Tokens, The Beatles, Top of the Pops