Continuing my riffing on music-related themes, I've just discovered another old treasure which I picked up several years ago - an unused multiview postcard which presents five different scenes at the Maison Lyons, Marble Arch, London W1. With my recent post about the newspaper advert for the Wimpy Bars of Majorca (Cosmic Wimpy) still quite fresh in my mind, I also return to ponder on yet another one of the restaurant brands under the massive Lyons banner.

The Lyons chain were well-known for their enormous restaurants, often on four or five levels, with each floor having its own theme - an all day breakfast at the 'The Bacon & Egg', or perhaps the quartet of waitresses (known as Nippies, and pictured below) at your service at 'The Star Grill'. 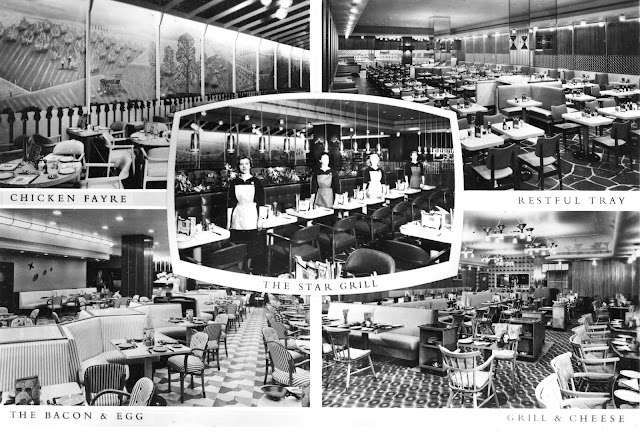 It's a pity that this postcard wasn't printed in colour, and I'm not quite sure of the date, but I'd hazard a guess at sometime around the late 1950s. Anyone reading this who can help to confirm, or who can work out a more specific date from clues in the interior fixtures and fittings, or the Nippies hairstyles, please do come forward!

This postcard of Maison Lyons is also sadly not populated with any customers at all. Without the bustle of life, the place looks rather bleak and quiet, and its the sounds of Lyons that I'm especially interested in. For in their heyday, live orchestras once played almost continuously thoughout the daytime and in the evenings - though I wonder whether there were any all night long performances when several Lyons restaurants had experimented with 24 hour openings?

Another lovely Lyons artefact is the special disc "All Muddled Up" which was released to mark the American bandleader Paul Specht and his Orchestra's invitation to perform at the Lyons Corner House restaurant in London's Coventry Street on 23rd May 1923:﻿


The story was taken up by the famous Variety newspaper, and their report exclaimed that Paul Specht and his band were enthusiastically received, and the restaurant was packed continuously from morning until closing hour.

Ok, lets fast forward the musical styles from Paul Specht's big shows for Lyons - and about forty six years in time, to the year 1969. Another sl-ice of the Lyons empire was its Lyons Maid ice cream, with all those tantalising ice lollies boxed-up inside the big freezers at the newsagents. One such lolly was called 'Luv', and tucked in-between the outside wrapper with its brightly coloured groovy logo, and its inner paper sleeve, was one of 40 'Pop Stars' cards. I've still got No.28 after all these years - and it's the terrific Troggs: